SMB shares are supported by Veeam Cloud Connect, but even in this scenario, it’s advisable to deploy a dedicated Windows machine that will act as the gateway server (not to be confused with a cloud gateway) to directly communicate with the SMB share. The data mover will be deployed on this machine and not on other systems, especially the Veeam backup server, which should be only used as a management console: 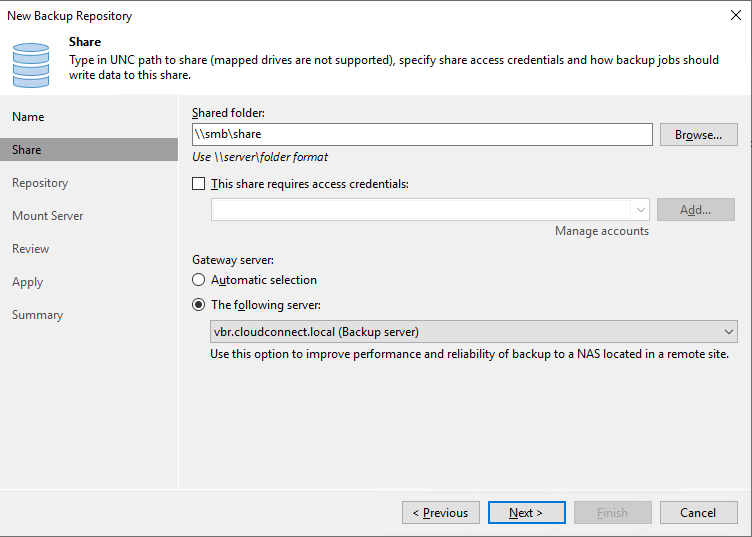 This server will ultimately act like a proper repository machine. If Automatic selection is left as the default option, inconvenient selection like the VBR server itself may be done.

There are several design choices for a backup repository, and to list them all here will be simply impossible because many will be surely left out. Instead, this guide will describe two options: multiple Windows Server grouped together in a SOBR group, and a standalone Linux Server, both with local storage. This is not intended to suggest these are the best storage solutions; it is mostly an example to better describe the process of adding a backup repository to the Veeam Cloud Connect infrastructure.

Networking is easy to manage for a Linux repository because only a control port is required:

The entire management of a Linux repository is done using SSH. Because of this connection, the Veeam Backup & Replication server deploys a runtime component every time that starts the Veeam Data Mover using Perl (the only other requirement together with SSH), then transfers data using the usual Veeam ports 2500 to 5000.

Once the Linux server is added among the managed servers, the configuration of a new repository follows the usual process.

NOTE: Starting from CentOS 7.0, together with SSH and Perl you need to install manually also Perl-Data-Dumper. You can do so by running yum install perl-Data-Dumper 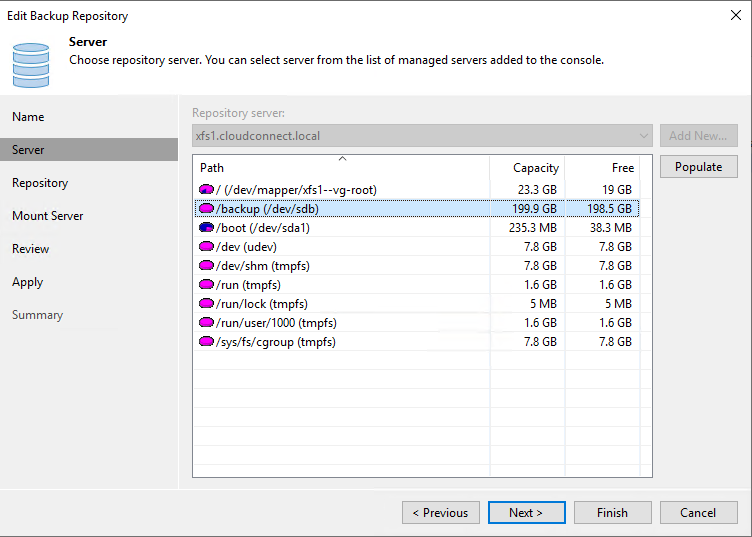 3.13: Select the path to be used as a backup repository

As explained in Chapter 2.7, concurrent tasks is an important parameter and should always be configured: 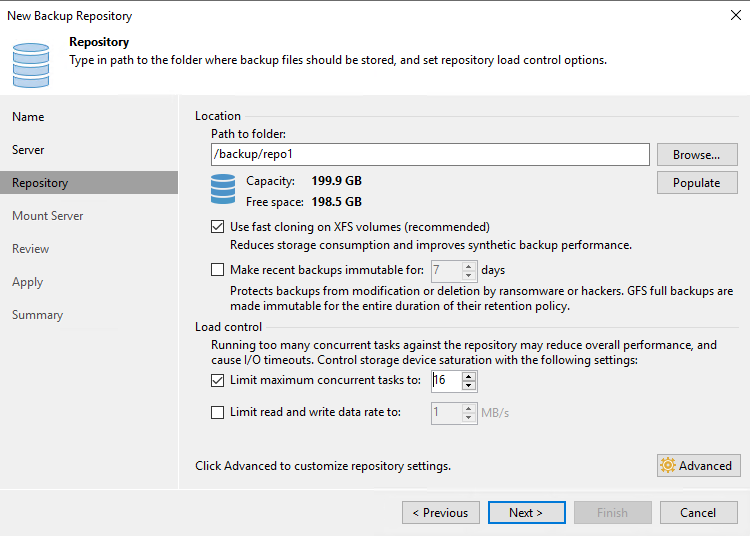 A typical Veeam Cloud Connect customer will be limited by the upload bandwidth that is available; this will be the main bottleneck in most of the use cases. However this does not mean it will be the primary bottleneck for the service provider: because the service provider is accepting several concurrent connections, the number of concurrent tasks connecting to the repository could be notable.

For this reason, a service provider needs to check the performance of a given storage solution, and needs to have room for enough concurrent connections so that customers tasks are not depleting the available resources. Please refer to chapter 2.7 and the “concurrency” paragraph for deep knowledge about how concurrency works in Veeam Cloud Connect.

In the Advanced options, it’s also important to configure per-VM backup files: this option allows for better utilization of the storage and the tasks: 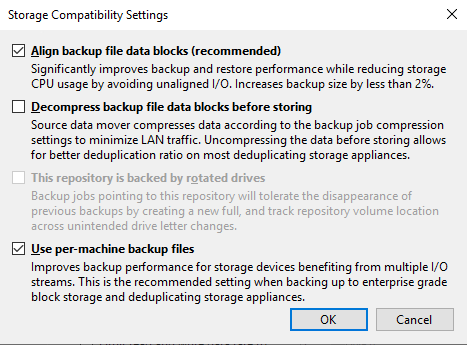 Linux repositories still need a Windows Mount server for file-level restores. It’s suggested to use one of the other machines available in the same Storage subnet: 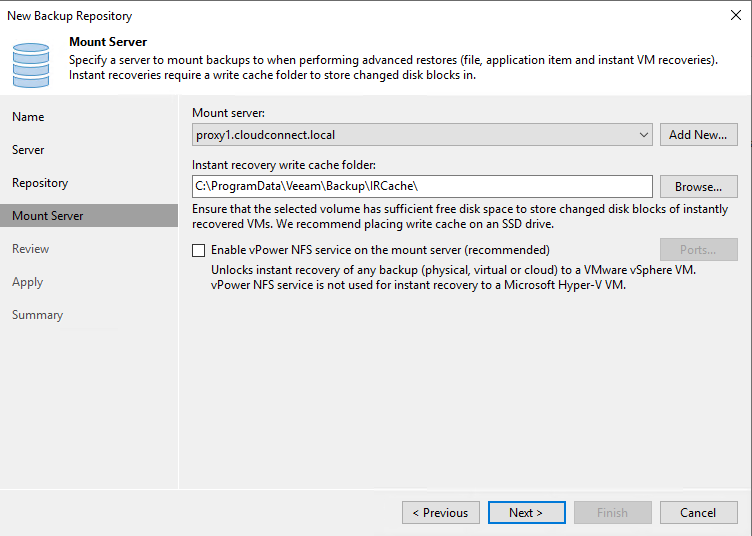 Because vPower NFS is not supported to date in Veeam Cloud Connect, a service provider can safely disable the configuration of this component during the repository creation wizard and complete it.

These four servers are grouped into a SOBR group: 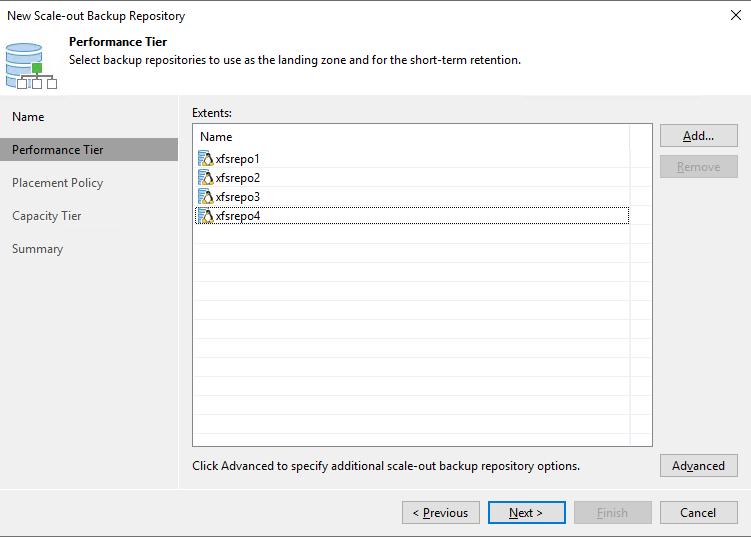 Finally, SOBR Group also has a Capacity Tier connected to it: 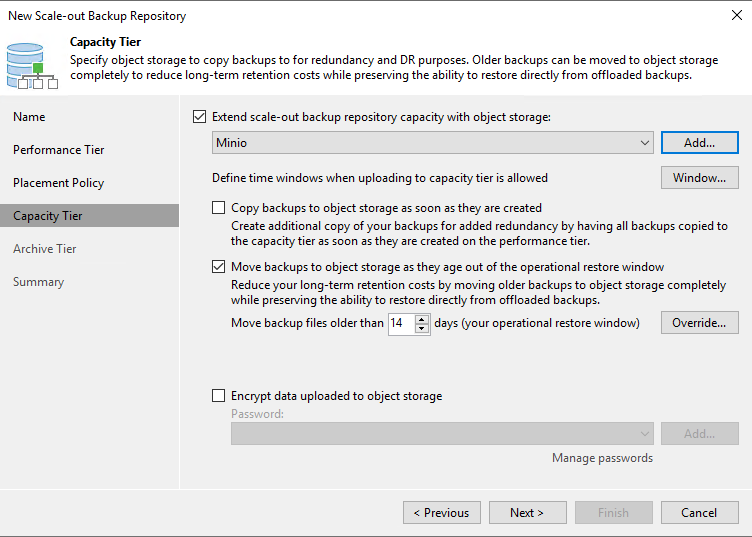 Networking requires a few more ports in order to manage a Windows repository, compared to the previous Linux repository:

You can disable last two rules and enable them only when a new Veeam component needs to be installed or upgraded because Veeam uses SMB shares to deploy the installer packages into remote Windows servers like WAN accelerators and Windows-based repositories.

Once the Windows server is added among the managed servers, the configuration of a new repository follows the usual process.

3.20: Select the path to use as a backup repository

Finally, because vPower NFS is not supported to date in Veeam Cloud Connect, a service provider can safely disable the configuration of this component during the repository creation wizard and complete it.

Once the backup repositories are deployed and configured, Veeam Cloud Connect is ready to be consumed for backup services.