Outside of the virtualized platform, there’s a complete range of additional resources that a service provider has to setup in order to guarantee Veeam Cloud Connect operates properly.

In particular, the network design is of extreme importance for Veeam Cloud Connect.

NOTE: VLANs and NEA appliances are used in vSphere environments, while on vCloud Director environments Cloud Connect takes care of replication and registration of VMs while relying on VMware NSX technology for the networking part. For this reason, there is no networking design related to vCloud Director in this book.

Each port group created for any service provider is tagged with a unique VLAN ID so communications between port groups, VLANs and networks are only possible by traversing a network extension appliance and thus are regulated. Veeam Backup & Replication, upon creating a new network for a tenant, automatically creates a new port group on the selected virtual switch and sets a VLAN tag. The available VLAN IDs need to be configured in advance both in Veeam Cloud Connect: 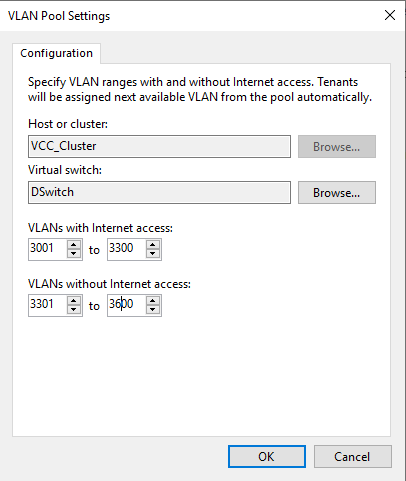 In the example, the service provider has a vSphere cluster named VCCR Cluster. There is a distributed virtual switch named vcc-dvs, and VLANs 112 to 149 have been already configured in the hardware switches on the uplinks registered in the distributed switch. No routing has been configured between the VLANs so this property will be exclusively managed by Veeam network extension appliances.

Two settings control the way NAT is applied to VMs belonging to a given VLAN:

This two settings are independent from each other, so that service providers can satisfy different customers needs.

During a full failover, replicated VMs are powered on and need to be reached from the outside so that a tenant can consume their services. All communications happening in a failover are managed by Veeam network extension appliances; in order to be reached from internet and to allow failed over VMs to reach the internet, an NEA acts like a firewall or gateway. To do so it needs to have a public IP loaded on its external interface. Just like VLAN pools, public IPs are not manually assigned to each tenant; instead, whenever an additional public IP is needed, Veeam Cloud Connect uses one of the available IPs that have been pre-loaded into the configuration: 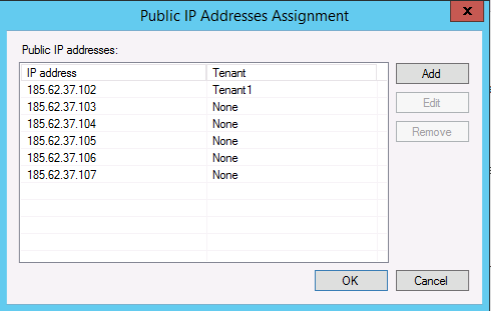 Service providers can consume public IPs coming from different pools, as long as the external interface of an NEA is connected to the right VLAN where this public IP can be used.

When Veeam Cloud Connect v8 was first released, only backup services were available. For this solution to work, cloud gateways could have been published either loading public IPs directly in their network interfaces or using NAT (network address translation) technologies, cloud gateways were using non-public IP addresses, and an external component like a firewall would have published the TCP ports needed to expose cloud gateways to the public internet.

This is still the case for backup services in Veeam Cloud Connect v9, but in order to correctly publish replica resources, it is highly recommended to load public IPs on both cloud gateways and NEAs.

There are two main reasons to do so: 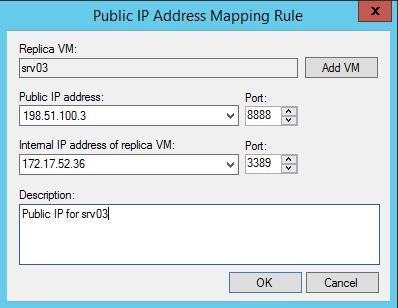 The public IP address 198.51.100.3 is a special subnet dedicated to create documentation and examples, but it can be compared with an internal IP used in a DMZ network, like 192.168.0.3. None of these IPs is reachable over internet. If a tenant attempts a failover using this configuration at the service provider, the service provider itself will need an additional NAT rule to publish the internal IP used in the NEA using a real public IP, like 185.62.37.102. The problem is that the customer can be confused because the Veeam Cloud Connect Portal suggests the user to reach his virtual machine over the IP address loaded in the NEA: 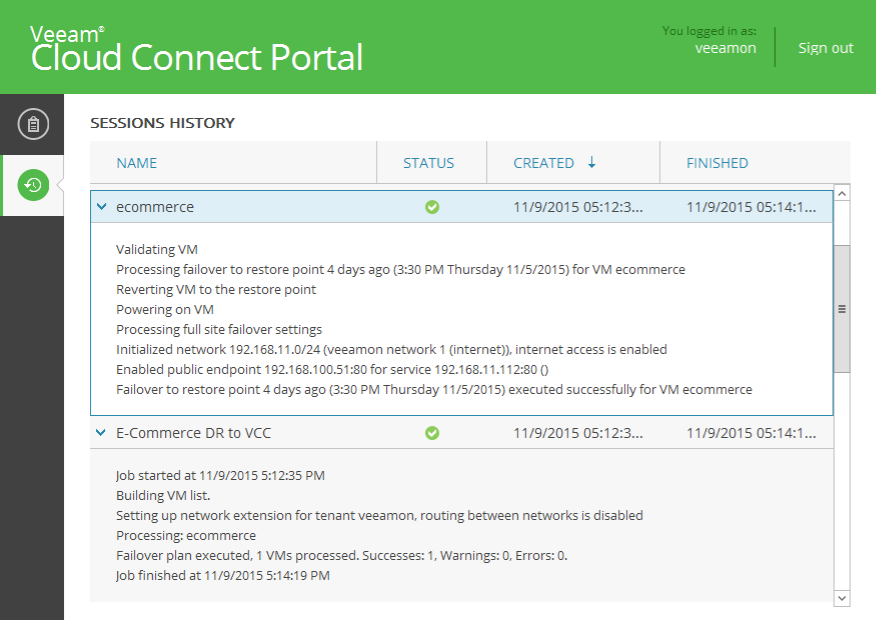 This IP address (192.168.100.51) loaded in the NEA is not a public IP, and so the customer cannot reach his VM unless the service provider advises the tenant to use the public IP that for example a firewall is using to publish the NEA on the internet.

This scenario is a major complication in both the network design and the level of automation that can be possibly reached. The NEA is a hardened Linux system, exposing to the outside just the ports that the customer or tenant has configured in his failover plan. No additional protection or routing is needed on the external interface of the NEA. If a service provider desires to have additional control, he can deploy an external firewall working at L2 (Layer2) and thus be totally transparent to the network configuration of a NEA or use the firewall to also be the router of the NEA’s public IP.